Pasadena, California — March 16, 2016 — Hotel Internet Services (HIS), a full-service provider of Internet services and solutions for the hospitality industry, has significantly enhanced the speed and reliability of guest wireless Internet services at the Sheraton Pasadena. Located in Pasadena, California, the property experienced the all too common issue of guest dissatisfaction with the pre-existing Internet service; from being unable to connect personal devices to dealing with weak signal strength. Now equipped with HIS Wi-Fi, the property has since reported a dramatic turnaround in guest satisfaction, with guest compliments taking the place of complaints. 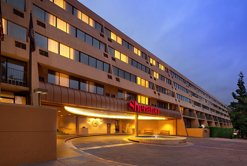 Implemented last fall, HIS Wi-Fi is accessible throughout the entire property, with users able to connect in all guestrooms, meeting rooms and public areas. With added features, such as HIS’ proprietary FUSION Gateway with integrated Zone Director, the Sheraton Pasadena is able to accurately gauge guest Internet usage at any time to determine how much bandwidth is actually necessary. Leveraging the use of a convenient conference tool, the hotel has also discovered a method to drive revenue in ways not previously feasible.

“After experiencing troubleshooting issues on a near constant basis, finding and implementing HIS Wi-Fi was a tremendous source of relief for both ourselves and our guests,” said Craig Carlson, Director of Operations at the Sheraton Pasadena. “With HIS, we were able to develop a network that would free us from having to spend hours each day troubleshooting to determine why guests were not receiving Wi-Fi, something that was in fact caused by either underpowered or overpowered APs providing an inconsistent and unworkable signal. Unlike past providers who simply considered the problem to be an issue in need of more bandwidth, HIS actually came out, analyzed the situation and recommended a solution that fully addressed our specific needs.”

In further focusing on the need to offset the main guest complaint of connectivity, HIS also installed additional APs in meeting spaces, so that the property could accommodate higher levels of traffic in those areas. As a result, guests of the Sheraton Pasadena are now immune to common connectivity issues such as WI-Fi signals not reaching devices or dropped connections, regardless of where they are located on the property. With 24/7 support from HIS, hotel leadership can also rest assured that the high quality and Internet speeds that guests currently experience will remain consistent.

“As with all services requiring some form of maintenance from time-to-time, one of our primary focuses when selecting an Internet Wi-Fi provider revolved around the ability to receive quick and effective support when needed,” concluded Carlson. “Along with competitive pricing, the level of assistance provided by the HIS support team has more than justified our decision. Even on occasions where we have made late after hours calls, we have been very impressed with their response times that often have been within minutes of us reporting an issue.”